The 125 mile long Harpeth River flows northwest around the southern and western portions of the greater Nashville metropolitan area in Middle Tennessee. Much of the Harpeth River’s watershed is rural, but the area is experiencing rapid growth in suburban development especially in the area around Franklin, TN.  Partially due to the area’s rapid growth, sections of Harpeth River have been listed as impaired on the State’s 303(d) list with stormwater runoff, non-point source pollution, sanitary wastewater, and water withdrawals all contributing to its water quality problems.

To better understand the location and extent of the issues within the Harpeth River, the High Definition Stream Survey (HDSS) method was used in March of 2016 to record important river channel information. The primary objective of the survey was to collect high-resolution, geo-referenced longitudinal and cross-sectional surveys on 77.8 miles of the main channel of the Harpeth River. The survey began at the Trinity Road bridge (upstream of Hwy 65) and continued downstream past the Narrows of the Harpeth area. Averaging about 16 miles per day, we gathered 22 hours of video, sonar and other data for each second during the survey resulting in over 75,000 lines of data representing the river channel conditions. The information was used to determine habitat type (pool, riffle, run), water depth, and left and right bank condition for the full extent of the survey length.

In all, 82 cross-sectional transects were surveyed in the Harpeth River and at the mouth of some of its major tributaries. For the longitudinal surveys, the multiple video concurrent streams were processed and assembled into a single video to provide a “first person” point-of-view of the entire survey path. From the HDSS results, we delineated 471 distinct habitat type units for the survey area. Runs were the most frequent habitat type, followed by pools and riffles. In terms of their overall length, the pool habitat type occupied most of the river length and riffles were a very small portion. As expected, pools were deeper on average than runs and riffles, and we did not see any difference between bank conditions scores associated with habitat types. We observed that much of the Harpeth River has incised stream banks and the potential for streambank erosion is moderate to high throughout large sections of the river. Encroaching development from both agriculture and housing developments restricts the riparian zone in many areas. Some of the specific issues discussed included the impacts of powerlines, log jams, livestock, and point-source runoff.

The High Definition Stream Survey (HDSS) approach proved to be a rapid method to collect a wide range of useful information about the Harpeth River. The resulting data will be highly useful for a range of river management issues. The cross-section transect information is useful to help better understand the quantity of water available at different discharges, while the longitudinal information can be used to support targeted restoration and habitat improvement projects. Along with the report, the field data and results from the Harpeth River HDSS project were provided in digital format. 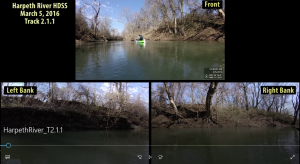 An example screen capture of the three-view video from the Harpeth River. The time and GPS location are embedded in the video.