For large dam operators, assessing the impacts of management actions on all of the competing uses for water can be a complex task. For the Alabama Power Company (APC), understanding the impact of a reservoir drawdown on potential habitat of endangered mussel species was one such problem. Bathymetry data was collected utilizing a sonar-based kayak-mounted depth profile system integrated with RTK-GPS to calculate surface areas exposed by reservoir drawdowns for defined contour intervals in the 6-mile Coosa River reach. Collected hydrographic data and overbank elevations from the National Elevation Dataset were imported into ArcGIS and merged into a unified geodatabase. Channel elevations were characterized in areas not represented in the survey by importing the data into HEC-RAS and interpolating missing cross-sections. The cross-sectional data was then exported into HEC-RAS and interpolated cross-sections were modeled at 10 m intervals. Interpolated cross-sections were incorporated with the survey data in an elevation geodatabase, and utilizing geospatial kriging techniques, an elevation surface was generated. This surface was utilized to generate contours for specific elevation ranges to support calculation of endangered snail habitat. 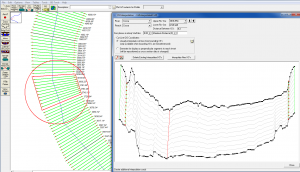